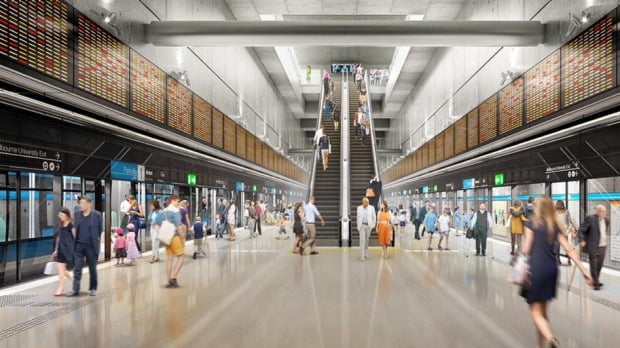 We are very excited to see the new train station at Parkville which was revealed yesterday by the Premier Mr Andrews via twitter. This is the glossy image of the new Parkville metro station, which highlights the new platform design which come with screen doors separating commuters from trains. This new design will featured on each of the five new stations to be built as part of the Metro project. A trend adopted from similar systems readily in use  in London, Tokyo, Korea and Dubai among other places around the world.

The system is a wall of plastic wich is used to separates commuters from the train, the screen only opening when the train arrives. Designed to function as climate control, blocking the wind that trains tend to push around the City Loop and protect people and commuters against accidental falls, suicides and or from jumping on the tracks. Mr Andrews also told reporters yesterday at the press conference that the state government is now calling for expressions of interest for high-capacity signalling on the Melbourne Metro Rail project, allowing for 30 trains an hour.  To read more: http://www.theage.com.au/victoria/melbournes-new-train-station-revealed–and-theres-something-not-quite-right-about-it-20160511-got1k9.html#ixzz48WEl82nb

If you’re keen to discuss your property needs, sick of bad property management do give us a call!

Here's your exclusive first look at what the Metro Tunnel station at Parkville will look like. #springst pic.twitter.com/ZTs0D6jeGF

Think Property & Co’s Guide to Rental Increases – How, What and Why

As a landlord, you’re handing over your investment asset in exchange for a weekly sum– you’re supplying housing to a market that’s demanding it. The rental market itself determines how much you can reasonably lease your property for – which is why it’s essential to research rental demand in the area of consideration before buying […]

LITTLE FEET ARE ON THEIR WAY! Congratulations to Anastasia & husband James, we are all thrilled for you having your first Baby! Looking forward to cuddles, giggles and pictures once the little one arrives!

1:1 Private Inspections vs Group Open for Inspections We much prefer to work with prospective tenants to find their ideal new home, there is great quality stock on the market at the moment and tenants are much more discerning. So you will see most of our opens are now by appointment only. Which really helps to […]

WHAT IS YOUR RENTAL PROPERTY WORTH? To all the landlords sick of the revolving door of agents, chat to the team who know what they are doing. Martine Bannister and Randal Sharp, we run and own the business and we care about yours. If you’re keen to discuss your property needs or just sick of […]

Refer a Friend and you get $300 value. You get $100 and your friend gets marketing photos free – Value $300*. Think Property & Co  Martine Bannister  & Randal Sharp, not your average agent. If you’re keen to discuss your property needs or just sick of bad property management do give us a call! DROP IN FOR […]