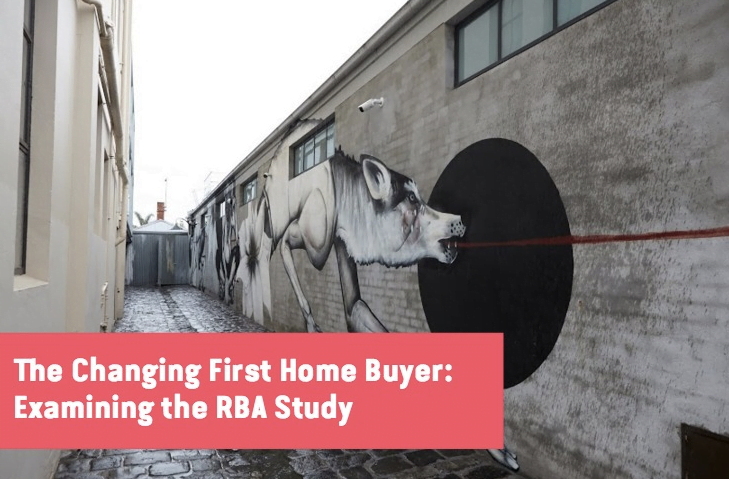 The Reserve Bank of Australia has released a research paper examining how life post-GFC has affected housing affordability for first home buyers.

Despite the intimidating heft of this paper, the study is remarkably interesting and reveals surprising insights into first home buyers behaviours. This is a Think Property & Co blog not to miss!

The internet is rife with articles featuring disgruntled first home buyers who have been seemingly gobbled up and spat out by Melbourne’s property market. This is not an entirely balanced view, as there exist first home buyers who have persisted in their search, saving a deposit and going on to acquire property. It’s true that property prices are on the rise, and salaries nationally haven’t kept pace – but with first home buyers taking out loans from the Bank of Mum and Dad, or living rent-free with their family to save a deposit, there  remain opportunities to access the first rung of the property investment ladder.

This isn’t the case universally, however: the RBA study has found that fewer young people are making the leap from tenant to home owner than they did pre-2008 – yet those who do become home owners today are better financially placed to repay their loans. With a sharp rise in property prices in many Australian capital cities, there is concern that first home buyers are taking on too much debt. Whilst this is possible, many first home buyers are instead rendered helpless by horror stories of properties selling for hundreds of thousands above reserve. They decide that buying a home is ‘too hard’, and choose to continue to lease, spending their income on other investment classes or on discretionary items. The more substantial deposits required to secure a property today represent a sometimes insurmountable barrier to purchase for many living in ‘generation rent’ – yet achieving substantial savings can cement budgeting habits that put newbie home owners in good stead for the future.

The RBA study aimed to identify ‘who’ today’s first home buyer is – how the character of this demographic has changed over the past 10-15 years. The steepest decline in the number of indebted FHBs and potential FHBs (that is renter-only households under 60 years of age) was in the 25-34 age group. The major determinants of individuals transitioning from potential FHB to indebted FHB were being in full time employment and being part of a couple – which generally increases one’s access to finance and therefore ability to buy a property. Age and household income actually had less impact on the decision to become an indebted FHB, with a 30 year old only slightly more likely to buy than an equivalent 25 year old. Similarly, a $10,000 increase in income for a household with a mean disposable of $60,000 only increased purchasing likelihood by 0.3%. These findings suggest that young people aren’t shying away from becoming an indebted FHB because of income. The data suggests that the decision to buy is associated with life changes and readiness to settle down. ‘Generation rent’ is most likely a result of rising house prices and a lack of confidence in the younger age groups to take on such substantial debts.

How much debt are FHBs taking on?

Higher property prices suggest higher debt – and that’s exactly what the study has found. Indebted FHB debt:income ratios rose 40% between 2001 and 2014, increasing sharply from 230% to 330%. Median deposits have risen by $28,000 in the 2008-2014 period, despite buyers maintaining a similar median LVR of around 83%. An interesting finding to note: in the period after taking out their first home loan, those able to buy actually paid down their loan slightly faster than the pre-2007 study cohort. Further analysis shows that FHBs were taking on less debt relative to their income than they were pre-financial crisis, even if a sharp rise in housing prices occurred during both periods. The requirement for a substantial deposit has played a role in FHBs behaving more conservatively, demonstrating they’re cautious about taking on ‘too much debt’.

Fascinated by these stats and factoids? Think Property & Co invite you to read the study and gauge an understanding of the FHB market today, uncovering the determining factors affecting first home affordability. If you’re a potential first home buyer and you’ve questions relating to the study’s findings, speak to your broker or financial advisor for advice on your individual circumstances. Think Property & Co also welcome you to our Collingwood office for assistance in sourcing that all important first property.

You’ve worked hard to purchase an investment property that will contribute towards growing your wealth. Although not a legal obligation, it makes sense to protect this asset and allow it to grow in value - right? This Think Property & Co blog unpacks what rental provider insurance entails, and why it’s worth investing in a [...]
Read more
Uncategorised

2021 saw many challenges and opportunities for the real estate industry, prompting us to think on our feet and revolutionise the rental process to reflect changing lifestyles and attitudes. For Think Property & Co’s final blog of 2021, Martine and Randal reflect on the whirlwind that was 2021, and share their hopes for the new [...]
Read more
Uncategorised

Think Property & Co are always looking for fresh and innovative ways to transform our real estate services. That’s why we’re pleased to introduce a new addition to our technological repertoire – Bricks+Agent – which will streamline maintenance communications between our property management team and clients. How will this impact your current experience? This latest [...]
Read more
Uncategorised

Think Property & Co are committed to being Melbourne’s property management agency of choice, providing an excellent service to both landlords and tenants. As we continue hitting our vaccination targets and lifting restrictions, we wanted to reflect on how the events of 2021 have reshaped our leasing services. This latest Think Property & Co blog [...]
Read more
Uncategorised

Think Property & Co are proud advocates for leading an environmentally friendly lifestyle. We’ve even switched all of our administrative processes to a digital paperless system, which you can read about here. However, we can all do our part in reducing our carbon footprint by adopting small changes in our daily routine. In this latest [...]
Read more
Uncategorised

It takes a lot more than a pandemic to shake up the property market! There has been plenty of resilience and growth observed throughout 2021, despite unprecedented lockdowns and restrictions. So how exactly are we faring? It’s worthwhile keeping up with the trends that drive the real estate industry, especially for homeowners and investors. In […]